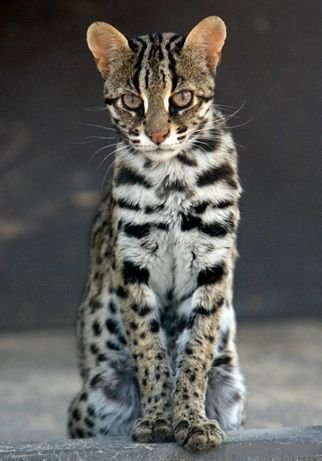 The Asian Leopard Cat is a small wild cat and has the widest geographic distribution of all felines. It can be found in forest areas throughout Indonesia, Philippines, Borneo, Malaysia, Thailand, Myanmar, Laos, Cambodia, China and Taiwan. The Leopard Cat also can be found in Korea, India, Pakistan and Russian Far East. Their range of habitat is varied, and includes tropical forest, scrubland, pine forest, second-growth woodland, semi-desert, and agricultural regions, especially near water sources, and may be found at heights up to 3000 m.

On average, the Asian leopard Cat is as large as a Domestic Cat, but there are considerable regional differences: in Indonesia the average size is 45 cm (18 in), plus 20 cm (8 in) tail, while it is 60 cm/40 cm (24/16 in) in the Amur region. The shoulder height is 41 cm (16 in) and the weight is 4.5-6.8 kg (10-15 lbs), similar in size to a Domestic Cat. The fur color is also variable: it is yellow in the southern populations, but silver-grey in the northern ones. The chest and the lower part of the head are white. The Leopard Cat bears black markings that may be spotted or rosetted, depending on the subspecies. It has litters of 2 to 4 kittens and the gestation period can vary from 65 to 70 days.

The Leopard Cat can climb trees skillfully. It is also able to swim, but will seldom do so. This cat is nocturnal, and during the day it spends its time in dens that may be hollow trees, cavities under roots, or caves. It spends time out during the day in areas where there are no humans. The Leopard Cat is solitary, except during breeding season. There is no fixed breeding period in the southern part of its range; in the colder northern parts it tends to breed around March or April, when the weather is nice enough to support newborn kittens. The estrus period lasts for 5-9 days. After a gestation period of 9-10 weeks, two to three kittens are born in a den, where they remain until they are a month old. The eyes open at ten days old, and start to eat solid food at 23 days. If the kittens do not survive, the mother can come into heat again and have another litter that year.

The female usually gives birth to two or three kittens after 60 to 70 days gestation. The kittens weigh about 75 to 130 g at birth and usually double their weight by age of two weeks; at five weeks, they are four times their birth weight. At the age of four weeks, the permanent canines appear, which coincides with their intake of solid food. Leopard Cats usually pair for life and raise their cubs together for about 7 to 10 months. Full maturity is reached at 18 months, but in captivity, the male can become ready to breed at 7 months, and the female at 10 months. Leopard Cats are said to be the most difficult to tame of all the Asian wild cats. The Asian Leopard Cat is often mated with domestic cats to produce hybrid offspring known as the Bengal cat.

In Hong Kong, the Asian Leopard Cat is a protected species under the Wild Animals Protection Ordinance Cap 170. The population is well over 50,000 individuals and although declining, the cat is not endangered.